Worth a visit: church at the heart of Altea

This parish church, dating from the beginning of the 20thcentury, can be considered as the symbol of Altea. Because of its high position and the striking blue domes with white decorations, it demands all attention. The Iglesia Nuestra Senora del Consuelo is a charming parish church that is worth seeing!

In the year 1617, a prayer house with several chapels was built at this location. The roof of the prayer house consisted of a large dome with different arches, the bell tower was to the right of the general entrance.

In 1695, the prayer house was given the status of the parish church.

Because the inhabitants of Altea could not go anywhere to pray, it was decided in the 19thcentury to build around the original parish church. The new place of prayer would be called Capilla del Santísimo Cristo de Altea.

In 1901, the decision was taken to demolish the original parish church and rebuild it. This new construction was to be considerably larger and connected to the current church “Capilla del Santísimo Cristo de Altea”.

From now on, this church would be called “Iglesia de Nuestra Señora de la Consolidación”.

The construction works, however, could not start immediately. In the 1930s a long period of waiting came to an end. The works could start.

The end result was a large church (all on one level) with a nod to the earlier construction, namely the striking blue domes.

The thoughtful use of large glass windows creates a very luminous interior. In addition to the incidence of light, the apse of the church also stands out. This is a polygon and characterises the baroque style.

There are also various nods to modernism, through the use of, among other things, ceramic chips, which can be found on the domes, and dragon-like figures.

During the 1930s to 1970s, the houses surrounding the church were so popular in terms of architecture that dozens of artists (mainly painters) came to Altea to paint the beauty of the church.

This is the main reason why Altea has a Bohemian atmosphere and is so loved by artists and craftspeople. This, in combination with small narrow streets, shops, and tasty restaurants, makes Altea a real top destination.

Interested in Altea? View our selection of fantastic houses and apartments for sale here. 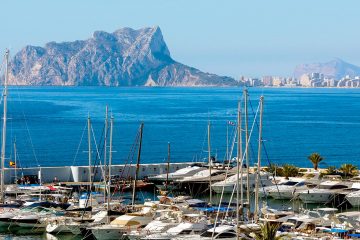 Rioja, what you have to know about this great wine